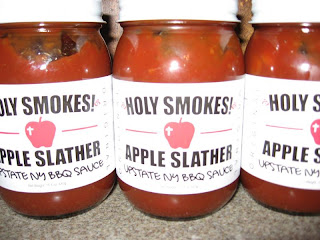 When I went to www.appleslather.com and clicked on the the “what the heck is it” link, it described this sauce as “a mild, sweet BBQ sauce with molasses, apple sauce, chunks of apples, cinnamon, nutmeg and a secret or two. Appleslather's unique and savory blend of chunky apple's, has a hint of cinnamon and nutmeg...plus a few other "secrets".Some folks have been known to eat it straight from the jar on a spoon!” I can truly agree with this comment. I also wanted to add it to my vanilla ice cream. There are literally chunks of apples in this sauce.

I did learn from their website that they are from they this sauce is made in Rochester, NY by a catering BBQ competition team called Holy Smokes, Inc. Please support them by visiting them on their facebook fan page. 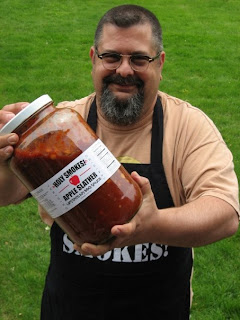 You can see the chunks of apple in the jar!
Before I start with this review, I wanted to define slather. It is a transitive verb meaning to cover or spread thickly. This is a little different than the transitive verb to sauce. Which means to flavor or season with a sauce.

I did marinade some chicken breast overnight. I was going to throw it on the webber, but it’s been raining here for a week straight. When I say rain, I mean downpour. 5” of rain. So I wimped out and baked it in the oven. I sliced it up and put it over a spinach salad with walnuts. The smokiness was so predominant that you would have thought that I grilled the chicken. What a versatile sauce.

It was suggested for me to try it as a finishing sauce for some ribs. I did just that this weekend. I wrapped the ribs in foil and poured in some of the sauce and finished cooking them. Generally I like ribs a little bit sweeter and less vinegary, but it did offer some great flavor to the ribs and was well liked by our guests.

I would give this slather a rating of 4.3 out of 5 because I feel it is a well rounded sauce/slather with a smooth taste. Beware! It is addicting and you’ll want to dip everything in it.

Posted by The BBQ Specialist at 12:13 PM