We were fortunate to get a little taste of the new pizza restaurant opening soon in Kittery, Me. It’s not just any pizza joint, this is wood fired grilled pizza joint named AJ's Woodgrilled Pizza located at 68 Wallingford Square in Kittery, Maine. This is an offshoot of Anneka Jan’s, a high end neighborhood bistro.. Charlie Cicero is the head chef down there. When we talked about woodgrilled, BBQ, or smoked, Charlie is an expert. He is the pitmaster for the award winning team called Mighty Swine Dining.

Chad made his way down there yesterday morning to deliver some Humphrey’s Lump along with some hickory and apple chunks so they would be ready for the grand opening. Charlie gave Chad a tour of the new place. A brand new J&R grill will cook the pizza’s. This grill has the capability of changing the distance in which the pizza sits above the coals. They plan to open early next week.

Before Chad left, Charlie gave him one of his All Beef Kielbaba’s. We immediately cooked it up that night and had some onions and peppers with it. It was wonderful. I can’t even describe the flavor and the smokiness made me want to eat more. It wasn’t salty, or fatty, but it was juicy. I asked Charlie what was in it and how did he cure it. He told me that there is lots of garlic, beef, beef fate and other spices. They grind it all up and stuff it. They hung it up in the walk in over night to dry alittle and foar a pelicile so the smoke “sticks”. They then smoke it until it reaches 160 degrees. They let it cool and vaccumm seal it. They don’t currently sell it, but you can order it in either of the restraunts. 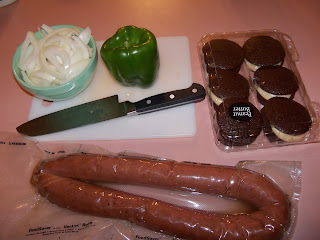 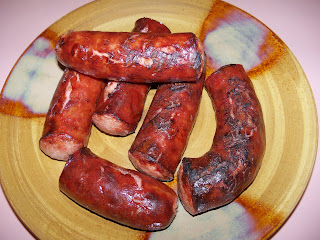 You can view their menu, make resavations, and get directions right on their website. http://www.annekejans.net/index.cfm
Posted by The BBQ Specialist at 11:35 AM