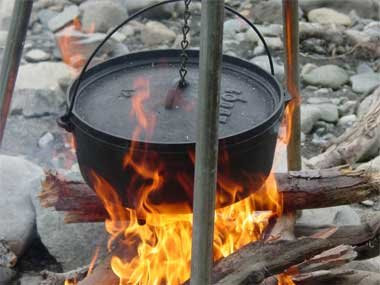 I recently met a nice gentleman at a BBQ tradeshow and he introduced himself to me in our booth and asked me what I thought of the show, the competition and general chit chat. During our conversation he mentioned that he used to compete in Dutch Oven Cooking Competitions with his wife all over the United States. I was really intrigued by this. My only experiences cooking with Dutch Ovens was to make baked or bbq beans. I was totally in the dark to what these awesome pieces of cast iron are capable of! The gentleman went on to tell me about stews, roast, breads and even pineapple upside down cakes that they made and entered into competitions and have won with. I couldn’t believe the versatility of these units!

Dutch ovens typically are made out of cast iron but there are aluminum varieties as well. I will focus my recipes and concepts on the cast iron type. There still are a numerous manufacturers of Dutch Ovens. Rachel Ray, Emeril, Le Creuset, Camp Chef, Lewis & Clark. These are all new manufacturers of Dutch Ovens and the prices range depending on size and quality from $25 - $250. I purchased my Dutch Oven at a yard sale for .25 cents. It was a little rusty on the inside and looked like it sat in some ones basement for 20 years but I couldn’t pass up a good old pan like that! (I actually bought a box of cast iron frying pans too!) I brought it home and cleaned it out with white vinegar, heated it up and seasoned it with oil. I have cooked several batches of beans in it and each batch keeps getting better. The gentleman from the show said the more you used it the better the food would be that came out of it, he stated that all the flavors that you use in cooking get absorbed into the cast iron and just keep adding all that flavor back into what you are cooking in it.

I am looking at baking bread in mine soon and will keep you posted on how it comes out. If any of you have experiences with Dutch Ovens contact us with you story, recipe, or advice, we would love to hear from you!

Posted by The BBQ Specialist at 5:09 PM